After having read the below thread on the way they could potentially add your very own background music into the game, it immediately reminded me of a game with a very similar system.

How to add MUSIC into pixelworlds! Game suggestions

After watching jakes newest video he showed off NOTE blocks that were in the game but never implemented fully. [image] And i thought to myself, yeah i remember those! It would be fun to have custom music in the worlds to make them more custom and things, or at least more music options in general. And at first i thought what someone else made a thread of recently; Putting it on a wire level. And i was like, okay okay. That’s a decent idea too, but im not so sure i would like how it works…

The OP suggested adding a music sequencer item that could function as a block similarly to the one from Little Big Planet to which I personally find their interface in the implementation to be too chaotic and overwhelming - especially in a mobile game.

Instead, I’ll introduce you the game with a similar system: MapleStory 2

Here’s an example of what their music sequencer interface looked like: 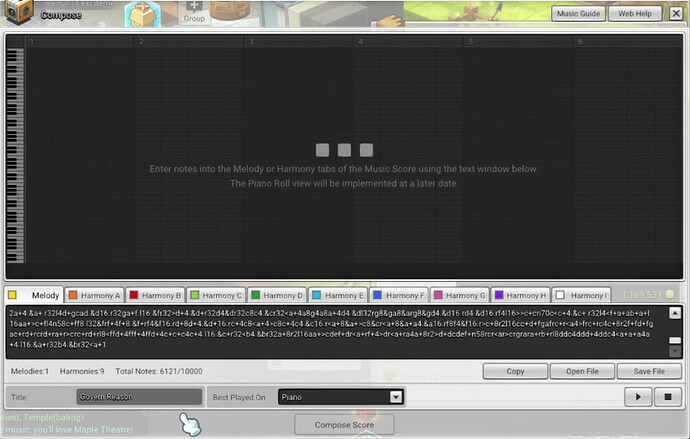 How it works: MML coding

The way it worked was that the music creator would have to code all the music notes in the textbox in order to create music. This code is called an MML code but essentially anyone who at least knows the basics of music notes in general would be able to write them too. For example, the code ‘A1’ represents the whole A note with the length of the whole measure, or the code ‘C2’ will represent the half C note with the half the length of the measure, and so forth, of up to a 1/64 note. The sharp note is represented by the ‘+’ sign whereas the flat note is represented with the ‘-’ sign - for example the D+2 would be known as the half D sharp. Although this could get very complicated the more complex you want the song to be as there are other symbols besides the musical notes like T for tempo or V for volume for example.

The picture below is the guide of all the syntax available: 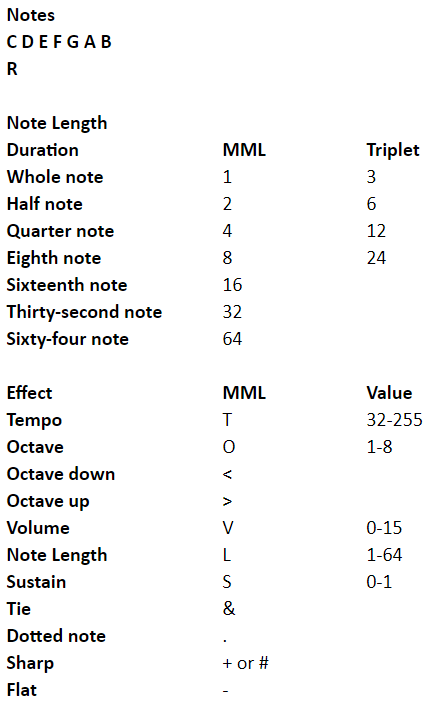 The sound of the note’s instrument in MapleStory 2 is played from the basic Windows soundfont so they could potentially just include the soundfont files in their game data for the mobile platform case whereas PC users will not be required to download any additional sound files since they could just use the same method MS2 did by loading directly from the user’s Windows PC source files.

Now I know that some of you might think that this is a terrible idea since there is a huge learning curve to learning about MML coding but here me out: The reason I think this system might be better than Little Big Planet’s implementation is the difference in the interface. Instead of having multiple windows in the interface, MapleStory2’s implementation kept everything into a single window - all you had to do was write the code for each track. There were separate tabs for each track to which different instrument sound could be selected, for example: Track 1 would be played by a piano whilst Track 2 would be played by a bass guitar. The music sequencer simply plays all the written track at once.

What if you don’t want to learn how MML coding works? Then that’s fine! In MapleStory 2, people who made music were able to write their code into an item with the music sequencer interface to which they could also trade and share with other players! This item is essentially a notepad in-game that stores all the code written by the creator to which the music player block could ‘hold’ the music sheet item, like how the chest can store items, and be loaded into the music player. This allows the possibility of people trading a ‘music sheet’ for others to easily use written music.

Back in MapleStory 2 however, there was no way to preview how the ‘music sheet’ will sound like, to which this imply that the community will have to rely on trust. Perhaps the ‘music sheet’ item could have a description of the reputable creator’s name as a signature for them to be deemed genuine and trustworthy?

Although they most likely wouldn’t go along with the exact way MapleStory 2 did, but at least they could utilize a coding system for music notes in the music sequencer for a simpler interface? What do you guys think? Go ahead and comment your thoughts on any of your favourite game’s way of custom music making - I’m very curious to learn of other potential methods of music sequencers!

It’s not a bad idea at all, but I think they’ll be used as background item and not this kind of compose.
I’d say it’s a good way to compose so you won’t be making any mistakes or whatsoever. But they can’t just copy to other games’ plans. they may add this tho.