I didn’t know calling Mr_Valentine a noob while he was giving away items was illegal lol… oh well, thanks for free ban Mr_Valentine (the only thing I said was “Mr Valentine is a noob” lol) 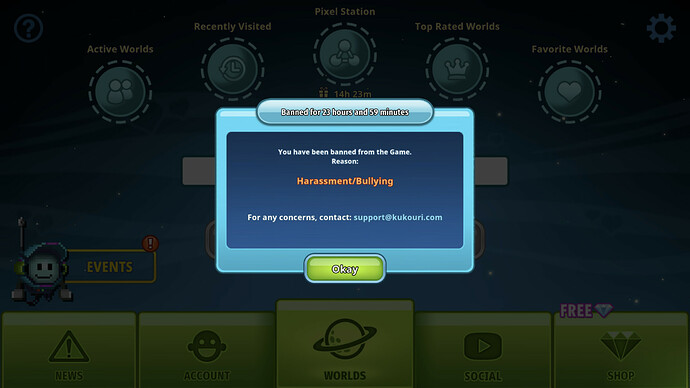 Interesting… But who is Mr_Valentine anyway?

His valentine’s special character Made by developement he is giving away stuff in Every valentine, hes like BIG Billy or smth, comes Every valentine but he is real human behind it.

Oh ok, so kind of like a secret person.

It is one of the developers. It’s Valentine’s day, nobody would like you going around calling other noobs and spreading toxicity in worlds and giveaways designed for players. Was there a need for it in the first place?

Call me whatever you like but I do not understand this kind of toxicity. Not to mention people claim they only called others “noobs” all the time, when in reality they said much more than that, lol.

But why would a dev of all people take that seriously?

depends on person, I dont take that very seriously If Someone says it to me. Or Mr_valentine wanted to ban Someone because he doesnt have very much time to ban people.

Yeah my point exactly. People victimize themselves on here but they know they probably said worse things than just “noob”. Out of everyone in that world, I doubt you can even see that one line alone.

My guess is he’s been seriously abusing. Of course I’m just assuming, but I highly doubt anyone gets banned just for that.

The only thing I said was that there’s absolutely 0 proof to what you’re saying and considering Jake got called a noob before on his stream and actually laughed it off, you can’t expect me to believe that you’re as innocent as you claim.

Do excuse me. I did not want to offend you anyhow, that’s not my purpose. I’m just stating the facts.

Alright xD Didn’t think the whole topic was a joke since you told me you can show the ban off to your friends.

Happy Valentine’s day to you and everyone else reading this

there are people who take the word “noob” seriously???

Hey , you are not the only one.
I got a few days ban for something like that.
I am done with this game.

If you think the ba was unjust or mistaken, message support@kukouri.com.

I personally doubt that you were only banned for calling him a noob. It could also probably because of your past actions?

The ban time was 24 hours there’s no need to contact support for that unless necessary.

Big rip to that, you could’ve got any items given away.