End to P2P: The Elven Tower!

Some context:
Last couple of days I’ve been getting back into Pixel Worlds. After a long time of inactivity a lot of changes have happened in the game. Some of these are for the worst. So far I’ve felt two issues in the game most - not much new interactable content in the game, and a huge rise in P2P worlds and scams.

If my understanding of P2P is correct, it’s when people are handing their bets to ‘the house’, then they attempt a challenge. At the end the winner gets both bets and ‘the house’ earns a little tax for hosting.
However, often this ends in ‘the house’ taking both bets and not giving them to the winner for whatever reason - either just being greedy or coming up with fake excuses to not give the prize up and keep it for themselves. I see countless public messages being sent out about getting scammed at one of these so called P2P worlds. And it’s quite sad seeing people depressing over it.

So I am here to create a suggestion that, both, fixes the issue of P2P (Or at least decreases it), as well as adds some new easy-to-implement content (As it is quite similar to previously implemented features) into the game. 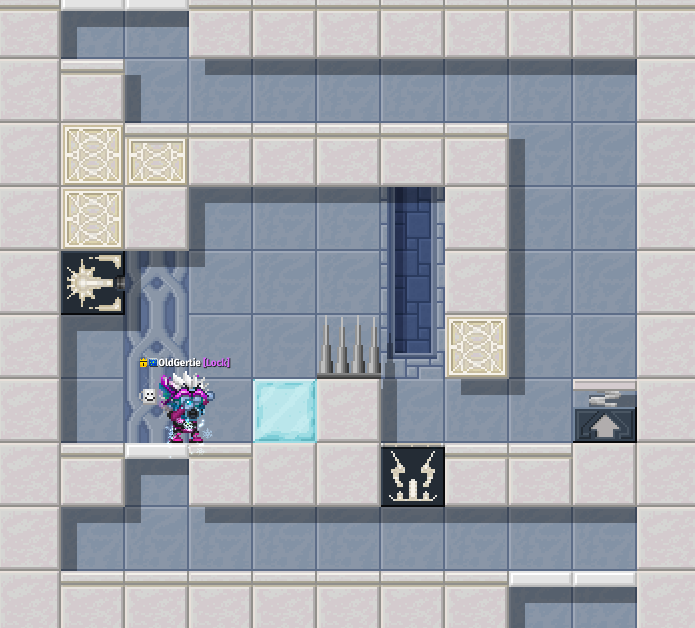 The main concept is just a redesign of one of the most beloved features in the game - The Black Tower on Halloween, except, it puts a good use to the Elven Blocks already inside the game and gives an opportunity for new block designs and traps.

‘How does this decrease the amount of P2P games in Pixel Worlds?’, I hear you ask.
This feature would work similar to the Card Battles. You have a ‘Challenge’ button when clicking on a player. This will open up a menu that allows you to customise the challenge. In here, you choose the bet and mode for the Elven Tower. 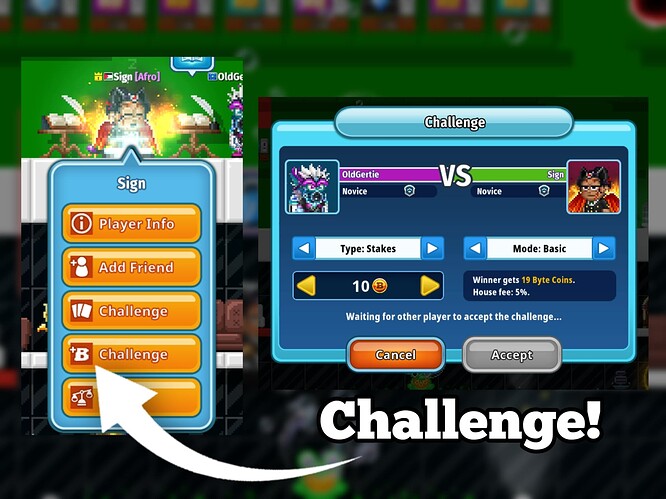 After accepting the challenge, it generates modules depending on the mode you selected. First to race to the top and touch the finish line, gets the coins!

These modules are created by the developers, and hey, they could even host a contest on creating the modules! Just by having about 30 of each type of modules, you already have enough diversity for endless fun! And most importantly - decrease the amount of P2P scams in the game, as people will be using a built-in FEATURE that works automatically and doesn’t risk getting scammed.

This, or any type of other ‘player vs player byte-betting game’ could decrease the amount of scams happening in the game by a ton. P2P is something that players clearly are interested in - so instead of making them illegal or fighting against them, go with the flow and create a feature out of it!

Tbh. P2p should have never been made legal in the first place . Also hello developer of Stellaria. Whats up? Hows the game going?

P2P is something that players clearly enjoy. That’s why there are so many of them! Which means players will always do their best to play and host them, even if they are made illegal. However, if a feature like P2P is added to the game, they will no longer need to risk getting scammed to get the same experience out of it.

Also, I’m here as a long time player and fan of Pixel Worlds, nothing else. Not the right place to discuss other games. (:

This actually seems like a cool idea! I also like the fact that you will be able to play without bets with friends.

Exactly! Play with or without stakes, just like card battles! And on top of everything - random module generation means endless fun!

Not only does it look stylish by being kind of a ‘reverse Black Tower’, but it also minimises scams! Two birds with one stone!

I have to agree that I’d much rather have this be a built-in feature instead of doing P2P hosted by other players. This could already be done in game, with Jet Race practice portals, but you’d still need to have a host so yeah not perfect. One small suggestion, instead of adding a new “Challenge” button for this, perhaps the current card battle “Challenge” could just open into a menu which includes both the card battle and this parkour world one as well. Small poorly edited image to help explain this: 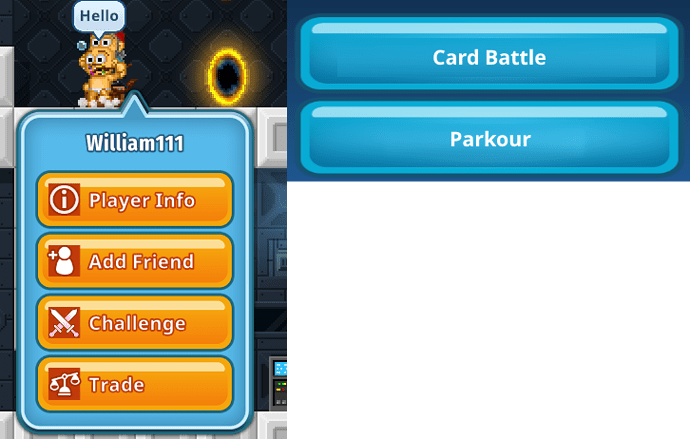 i agree with this post @Pleiades, also for my opinion P2P is increasing chances to get scammed also increasing hackers in game and also sometimes if player lost it he/she might become mad and rage which make him start using bad language i feel p2p is not good idea unless if there was system like cards people bet and then countdown start and winner automatic get rewards, like for example halloween tower let say similiar concept and who reach at top first get prize. like a game system which make sure no one get scam

that’s a good one, I’d like if we had something like this in the actual game, plus mechanisms like warping to blacktower with a button press is already made so it wouldn’t require as much work from programmers as for example in card battle.

Well, nice and all, but you probably need devs for that and that is…
well lets say rather problematic

I’m sure sooner or later the developers will bring out new content. Besides, this feature I’ve created the concept for is something easy to implement. There are very few, if any, new things that need to be programmed. It’s mostly stuff reused from features already in the game.

The 2021 blacktower incident…
Basically there was an accidentally added block on one of the modules that made it impossible to finnish BT(got fixed on the first day). If they’re gonna make such a generation system they should be aware of making it generating possible levels.

I’m sure sooner or later the developers will bring out new content.

The game is on life support, I’m unsure if it will ever go OFF it.

That’s a pretty good idea. Hopefully, it will become a reality.

Lovely suggestion, like Vaikas said this would be cool to have in-game