Hello there!
Today I am comming with small improvment to globe’s effect… In my opinion snow shouldn’t appear in
the closed spaces. ( snow storm globe is used as example ) 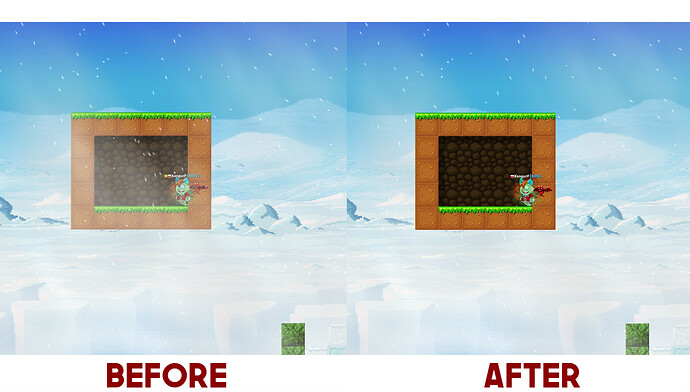 What do you think about it?

It’s nothing major requiring immediate team dedicated to implement this, but it’d be nice if they slowly work on this… It’s definitely a plus.

You could even give people the choice of how they want their globes to display, so if you’d rather have it one way than the other, then you can do so.

When implementing the weather globes this was one of the things we talked about internally.

It could have been either way, but we ended up putting the weather effect on the topmost layer for players to create cool external environments where the weather effect shows best. If players would make lots of interiors they wouldn’t use the globes anyway or if they used its role would be more minor.

Should we have chosen the other layer someone (or perhaps even you) would have made a post about wanting the weather on top.

Perhaps at some point we can allow players to select the depth but for now it’s more dominant and on the topmost layer.

Well… I was thinking about abillity to edit any area…

Choosing any deepth is not as bad idea but it’s not the best as well.

Eg. You are building home, and inside it there is snow storm. Would be cool to remove this effect from home area by using any tool, obtainable from the store.

I agree with EndlesS, but of course it would also be nice in the future if has a few options to choose from.