Hey… so i’m starting to see that in pixel worlds many players are homophobic, using slurs etc. when they find out that someone is gay or anything else from lgbt+. I was wondering, is there way how it could be stopped? like pw would start doing some small lgbt updates or whatever else so many players can see that pw is safe place for lgbt+. Sorry, but i’m starting to think that community is getting only worse and I can’t even hang out in worlds without listening to slurs and stupid homophobic jokes + bypassing… Also when pw posted new post on Instagram (fashion update with pixelian that had pink clothes etc. pic will be down below) I saw in comments again many slurs etc… Plus lgbt+ hangout worlds are getting banned for example world QUEER was banned but they won’t ban world like date where literally kids are talking about mex etc… 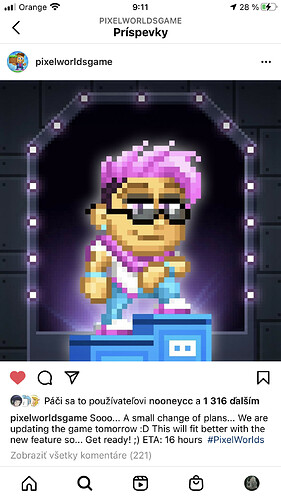 Unfortunately, that’s the world we live in. People have their own opinions, even if such opinions are degrading to another person(s). If you ever experience harassment for your identity, make sure to report their message under the subtopic, ‘Harassment/Bullying’ and mute the user, negating all other interactions you may have with them (If need be, leave the same world).

I’m not sure if the moderators will/can do anything other than a warning (not guaranteed), but it’s worth sending a report just to notify them as it still is classed as harassment/bullying and I’m sorry you’ve had to experience this.

exactly what bpup said but i don’t really know how they could make an lgbtq update? what would it even be?

There could be a pride event in June for a day or something. Who knows, there certainly are options. But it’s ultimately up to the administrators jurisdiction if they add something like that. Would be nice to see though.

that would be really nice

Seriously, the world QUEER got banned? i used to support them when i started at the forums > "QUEERS" an LGBTQ+ world

Also as @BPup said, report the player who is trying to insult you. and mute them.
Some Growtopian players are coming to this game, but toxicity will be prevented if moderators are active.

the NPC is a girl, and even if it wasn’t I don’t see what the problem is…
I just think people are stupid and need a hammer of education mashed upon them.
We simply need more moderation to get rid of the bad people who refuse to respect other people for who they love

If you see something that you think is breaking the game rules, please report them and leave. I don’t want to see some politics in this game. There’s a rule against talking about socio-politics. I, and many other players, want to have fun in this game and forum. I’m not here to see various controversial social politics stuff. Just leave it to the news and stuff.

This is about the behavior of players in the game and their actions taken against it, what social politics? PW doesn’t even have news related things…

Anyway to the @ylliqm, every community will have these people, because most of humanity kinda sucks… but if you ever find anyone in game doing that stuff just lmk and I can shut them up. If all else fails, report it

What I was saying is stop using this platform to ‘lecture’ us about things like this. We’re not here playing this game to constantly be exposed to the ‘wokeness’ and how ‘progressive’ people need to be. If you feel whatever you’re doing is breaking the rules, just report. No need to make this as a LGBT+ platform.

From my understanding, this is only the second post about something like this. I’m not sure what you mean by ‘lecturing’, this is simply a discussion about how one player feels they have been treated and about a growing problem in the game. No ones lecturing anyone about anything here.

Once again, no ones saying how progressive people need to be. I just believe it’s common courtesy to be nice to each other.

I don’t want to see some politics in this game

You have not seen this in the game, you saw it on the forums

I, and many other players, want to have fun in this game and forum. I’m not here to see various controversial social politics

Nobody is forcing you to read this thread, you can continue having fun in the game and forums and just ignore this one if you find it too controversial.

In my opinion, this is a problem where heads should not be turned the other way. .
The world QUEER getting banned is outrageous

The world “Queer” was likely banned due to it only causing mayhem in the community, breaking rules, and not because it’s inherently offensive.

We all have different definitions of “Homophobia”, but don’t you think that it’s a bit overboard to call mostly children using it in a game played by kids, as a poor insult or a joke actual homophobia? I do, and I think that calling it homophobia inflates the actual meaning of homophobia.

The best way to prevent further mayhem in the community is to silently address it, as to not blow the issue out of proportion or worsen it, which means hiring more workforce to moderate, and preventing people from creating worlds with content that may cause conflict between people of different opinions and backgrounds.

Scammers, clowns, toxic people and trolls are all a part of any community. Where people exist, exists also those who try to manipulate others or bully others. That’s why there’s a TOS that you have to agree to, along with moderators and a set of in-game rules that you have to abide by when playing.

While some can falsely interpret their actions as being homophobic, their only interest is to make profit, and that in turn means keeping the community as healthy as possible, as to keep the players’ interest in playing the game up, which means them having to make decisions in order to prevent mayhem that causes the opposite.

Rest assured, the moderators are there to punish players who abuse the rules. The community consists of thousands upon thousands of active players, of whom a substantial percentage are children. Moderating what each and everyone says or does is a virtually impossible task, trying to moderate and punish everybody who break the rules is like the limited police force in X country trying to hand out fines to everyone who speeds, for speeding.

Whether anyone succeeds in offending you and getting the reaction out of you that they want, is up to you and nobody else.

As a final note, Pixel Worlds is just a game. It’s unfortunate if you or anybody else feels uncomfortable, but luckily, you can always leave a world within the game, close the game and take a break from it whenever you want to.

Well said. I think this almost completely wraps up the need for this thread as this discussion has come to its close.

Thoughts on closing this thread? To prevent further ‘flare-ups’ and to make sure we don’t step over a boundary to break the forums’ rules. @Freak

No need to make this as a LGBT+ platform.

It should be? The whole world as a fact should be supportive of it but humans are garbage

You have not seen this in the game, you saw it on the forums

Yes I have. Unfortunately I cannot name who it was, but yes I have. Twice at least in different days, potentially more that I don’t remember.

Nobody is forcing you to read this thread, you can continue having fun in the game and forums and just ignore this one if you find it too controversial.

This is not the place for all these ‘woke’ arguments. Go on to politics platform. Stop cluttering game forum with ‘righteousness woke’ and ‘progressive’ ideas. Never say anything about the queer world, but this thread is unnecessary. Imagine if I were to create a thread about global politics or such and simply say, “you don’t have to read it if you don’t like it.”

I disagree with that on personal level, and at the same time, this is not the place to convert PW players into LGBT supporters or making this forum into LGBT platform.