So yeah , today is a new tomorrow, new things to say.
Today I just checked what’s up with this community.

And there was this world called “Ionas_Birthday” , went there , told ionas happy birthday and stuff.
After that , since y’know , I’m me, I start giving out my opinions on the mods , and someone got mad (The owner of the world which is also a mod and the mod’s birthday) and banned me from world (or it was just somebody’s pet)
You know , in the mod applications , I know that mods should ignore the negative and all that , but why the hell would u ban the person that is saying stuff about you.

There are many people out there that wanna become mod , that might be better than the actual mods but they just don’t want to due to how the community is , and if u do something wrong that’s it.
In my perspective , I have all the rights to talk about mods since they did so many to me , and so many others.

Mods think they are special but , they are really not, they are just lucky. A few mods just ran for fame , and not to talk about the people that are well-known players and when they talk stuff about someone , mods are on their side due to that player being well-known. Nobody can tell their opinions in this game due to the fact that your going to get cyber-bullied and judged by the community.

Any Influencer/Well-known player can just cancel you in a few days since the community will be like “Yeah , he is very right” . Some people if they want to get someone banned , they just annoy that person , like , insulting their family , how you look (in case they got a picture of you) , how mentally retarded you are , then just show the proof that person says back to the “victim”.

This is some stuff I gotta say , tomorrow , new topic.

You probably told him something he is unconfortable or harassing? What did you tell him?

But let’s be serious, mods doesn’t ban people without a reason. He probably knew your being sarcastic because he probably seen your topics about ionas. I really don’t know what’s happening here man…

If moderators are only here to gain fame then they should be removed now. Mods are suppose to work and cooperate and not celebrate birthdays or anything (no offense, so sorry)
I mean they can still enjoy the game, but banning you at someone birthday even if it’s not insulting or anything is just weird.

I can’t take it anymore, I’m just against attention-seeker. too cringe…

See you I guess. Hopefully your doing well.

Quick update : it was a world ban , not ban on account , tho , if I was staying for longer probably I was getting a ban since y’know , I am not ionas’s fan.
Thought u were saying that I got banned on account

That’s what I meant tho, it’s weird how a mod bans you even if your just being innocent. Fan or not.

saying stuff about you.

Same case with one SPECIFIC Discord Moderator, honestly. If you talk bad about him, BAM. You’re punished. These critics could actually make them better when it comes to moderation, but no. They all just ignored it, “Living inside their own Worlds”.

Any Influencer / Well-known player can just cancel you in a few days since the community will be like “Yeah , he is very right”

This is a Capitalist Game, after all. The rich/powerful often manipulates the poor and hates it when someone tells the truth. They really don’t want to get exposed for their dirty tricks, thus playing victim…

Idk if I sound like I’m siding the mod here, but you should maybe try to let go of the past, and ignore things you hate/dislike, if you dislike ionas. You also probably shouldn’t have talked to him in public

Today I just checked what’s up with this community.

Like I said, can’t you just ignore things you dislike when it clearly doesn’t do good for you?

Yes don’t have fun in a video game

since we all like talking about moderators, here are 2 old screenshots from the old forum that i find funny to look at. 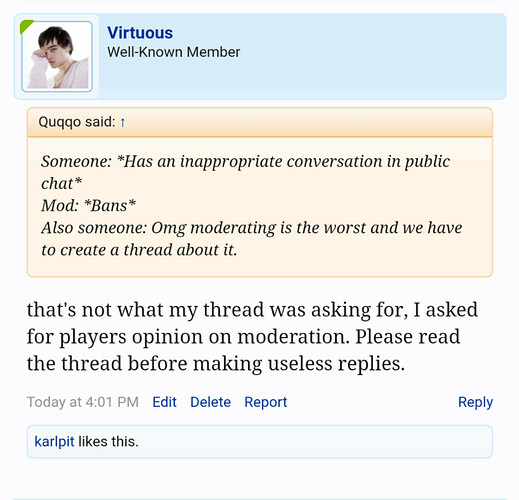 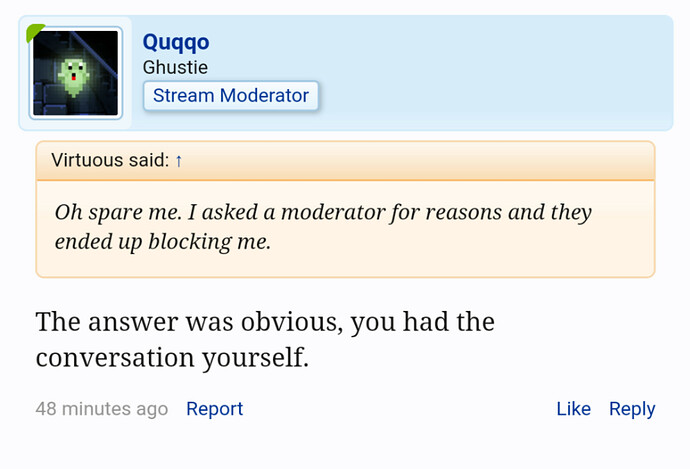 im a lot more repressed these days when it comes to these things but from time to time, i like to make statements.

EDIT: this was like 2 years ago btw so things might’ve changed. just want to make this clear.

EDIT 2: For context, I was banned in the discord server and wrote a thread about my experience and asked for other peoples opinion/experiences. I did end up getting unbanned after reaching out to another moderator (as I couldn’t contact the one who banned me) but this was after a few months of quiet.

Yes don’t have fun in a video game

I said they can celebrate birthdays, but world banning players even if a player isn’t even doing anything gets a ban. Is not justified