Personally I liked the old forums a lot better, anyone else agree?

I disagree. This one is somewhat decent except that neither of the topics were actually archived from the old forums.

I do miss the old forums, especially for some features that this new one doesn’t have.
However, I still preferring this one.

I also personally miss some features like active members wherein i’ll see myself alot with only a few other people online…
But this also improved in some ways so I’m also good with this.

There are a couple of features from the old forums that I miss, such as status’ and being able to follow people, but I prefer the new forums.

I’m very sad that there are barely any backups of the old forums though, a lot of Pixel Worlds history got deleted alongside them.

You can use the wayback machine like @Shawn had said.

no, the old forums was more like Twitter pw edition, disagreeing with “OG’s” opinions = admin suckup, minimod. That’s the pale define version of that site, and yet there are some of these people still across this platform too, but chances of them being whiped off here is more likely to happen.

You can use the wayback machine like @Shawn had said.

You can only use it to view about 10 different crawls of the main page. I made a post a while back containing all of the old forums’ backups.

So, this is it? We have lost everything on the old forum? Pixel Pub

preferred the old forums. easier to navigate, less clutter, people’s threads were mostly straight to the point and useless comments weren’t made as often as they are here.
i’m not saying this forum is bad, i just think it’s found a new demographic of people that i don’t very often like.

I did like the old forums quite a lot, but I feel like this forum is a much cleaner design and more streamlined. I do agree with @Blackwight though. I would like to see the status feature of the old forums here as well as a few other features if possible.

I don’t like the old forums but I would like to see the history of it, an archive of it. 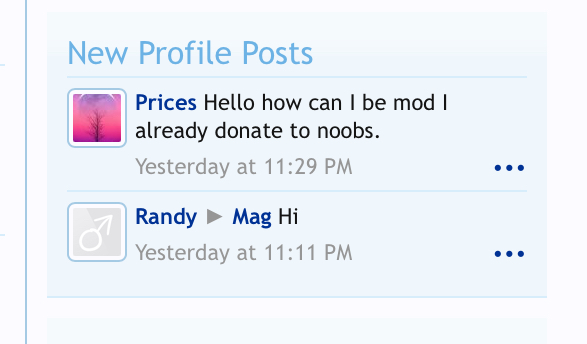 The only thing I don’t like about the new forum is that it’s quite cluttered. Other than that, I’m pretty much fine with the new one.