If you have been paying attention to the best set competitions and the discussions about them, you may have realised that the Epic PWR suits get the most hate 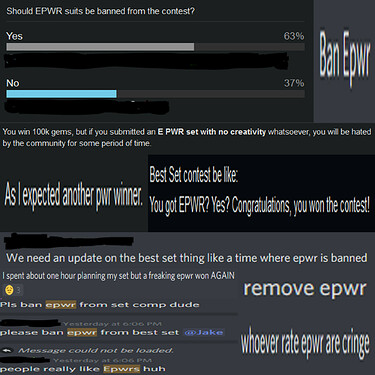 And hopefully change your mind about this whole thing.

So why are people hating players who join the best set contest with the epic pwr?
Here are the most common arguments:

Let’s go deeper into each one:
“It’s lazy”, this one refers that you can easily grab a EPWR and slap it on and win easily if the theme allowes it. Nothing to say here.
“It equips many clothing slots at once”, this one means that there is not much room for creativity, it’s basically the entire set.

Now that we are done with that, let’s see why EPWR sets keep winning the contests

Simple explanation: Pixel Worlds is a game that appeals to kids, kids have short attention spans and patience.

Now let’s build on that, when i’m voting for a set, i’m not going to analize each and every set and determine which is the optimal one to vote, hell, sometimes i don’t even get a choice that fits the theme,
and there are 25 choices to be made, i don’t have the patience for that, and the rest of kids playing the game don’t have it either. That’s why, when choosing a set, you go for the most eyecatching one, the most attention-grabbing one.
Oh! Would you look at that? A list of things that grab attention:

One of the ways that grab visual attention is when there are big things that can be seen. Attention may be grabbed just by pure size, or by something that seems bigger than we might have expected it to be.

There’s a psychological phenomenon you can use effectively called the curiosity gap, which is the gap between something a person knows and something he or she wants to know. Explanation: A new player may not know what an EPWR is, it’s sparks curiosity in the brain because it is such an unorthodox item.

Quite a convenient list, that the EPWR neatly checks out in every contest.

Joining the best set contest is not wrong,

I’m sure most of the people hating it are people who actually spend time and effort into making the best set they can, and it does feel unfair when someone who spent less time than you wins just because of a cheap tactic, but you either get past it or you cry about it, i know how it feels not getting the attention and acclaim for your hard work.
Everyday hundreds of artists spend their valuable time perfecting their music, making the best album they can make, only for Justing Bieber to spend a quarter of the time making his, but getting twice as much sales and streams.
Justing Bieber will not look at the struggling and hard-working artist and decide to not make cheap music anymore, just as the rich player will not look at you and decide to not wear his expensive items anymore.

If you have read the entire topic, thanks for reading, you are now free to share your thoughts on the entire thing

This is the end of my topic, a pretty serious one for me
Let’s calm the waters with a funny picture.

epwr keeps winning because the community keeps letting it win. you don’t have to go into psychology to explain why it’s winning because it’s obvious; the people who are saying it shouldn’t win are not a representative sample of the whole pixel worlds population.
anyway, i’m not disproving anything you said, there is just a simpler less complex answer that can be attributed to this.

also this isn’t topic related, but if you’re actually interested in research topics, you should definitely reference using both in-text and a reference list. it somewhat protects you from plagiarism and makes it easier to find which source you used to provide which information. this also makes it look significantly more professional and trustworthy lol

Thank you for these completely useless and unnecessarily massive pictures, that add a lot to the conversation

I agree with everything said expect your paragraph on the “its too big”.

Sorry to surprise you but many rich players also put on expensive big items knowing that they would win. Are you telling me that the Best set winner for red put on a pwr suit without the intention or knowledge that he was gonna win?

Also many rich players illegal trade. And when they complain about losing a giveaway or best set this is what annoys me the most

If there was a Cig Bhungus set ingame, it would’ve won every theme. He’s way too overpowered.

It’s just that people who don’t own an E PWR would automatically lose. This is due to children voting for the big sets (as you mentioned above). This gives the Best Set feature a “reputation for being Pay to Win”. Although I do not agree on E PWRs being banned, it’s just tiring to see these sets with this kind of fashion win over and over and over… It has the same energy of every winner wearing a Halloween legendary.

And Hatred is born in order to protect love

Epic Chungus! We are doomed.

epwr itself is cool item but it ruins the contest…

Good editing, and thanks for sharing me this thread in the discord server. I do agree with the thread but I don’t hate it, it’s just quite unfair if another EPWR wins again and again. Only EPWRS. But now after the latest winner isn’t using any EPWRS so I can really think it’s getting better.

who flagged this work of art???

It wins, simply because of people’s choice.

who the hell flagged this

Lol who flagged this masterpiece?