This is why making WLS untradeable is confusing

Now how the real world money works (in US) is that we have dollars and cents. Now, think about wls being dollars and byte coins being cents.

Imagine if you go to a store and something costs 3,5$ but the price label says “350 cents”. Isn’t that confusing? Wouldn’t 3,5$ be much less confusing? That’s right. It IS less confusing, that’s why dollars have been made in the first place, to reduce confusion.

Now, this is my point:
Making wls untradeable is like making people only buy stuff with cents instead of dollars. Yes, it technically works but it’s MUCH MORE CONFUSING.

I hope you guys understand my point.

and in Pixel Worlds it’s EVEN MORE confusing than in irl:
Imagine one dollar being one wl. That means 100 dollars is 100 wls. Makes sense , right?
Now, imagine one dollar being 260 byte coins. That means 100 dollars is 26 000 byte coins. That’s such an odd number and trading something for 100 is obviously much less confuing than trading something for 26 000

Imagine someone selling 999 spike bombs/wl, makes sense right, 999/wl. Very simple. Now think about it with byte coins. You can’t sell stuff “per wl” BECAUSE THERE ISN’T WLS. You sell items per one item price. So you have to look item info “oh, this item is 0,80 per byte coin” and you have to calculate the price for 999. Can’t you guys see how confusing this gets?

Also, if I made a paytoilet and put “PRICE: 100 cents” as a sign, most people are gonna focus on the “100” and not convert it to $1 in their head, leading to nobody using it unless in an extreme emergency.

Trove has 2 accepted currencies on the marketplace. It used to be alot more but when the game updated more and more, they narrowed it down to only 2.

The thing about flux is that you can either sell for “kf” - thousands of flux, like “WTS credit pouch 300kf”, “f” for very cheap items “WTS glim 1/2f”, and mf for the most expensive items in the game “WTS ganda 10mf”.

Bytecoins aren’t like that, you sell stuff for units and not flat thousands/millions, so you gotta remember prices like “639bc”, while world locks would be a flat currency, you just remember “5wl” or when really necessary, “5,50wl” for 5 wls and 50 lock tokens.

The solution would be to make byte coins convertable, like you convert 100 wls to a pl

No, you convert 1000 byte coins into a mega byte coin (mega is just an example)

Well that defeats the whole purpose of removing wls. They want to make so there’s one currency only. Having mega byte coins and normal is 2 different currencies. Mega byte coins would be just like WLS.

I can exchange 20 1 dollar bills for a 20 dollar bill. It’s the same thing. It makes things easier sure, but i doubt they would add that to byte coins.

Still, my main point is that flux is flexible to a point of either needing units, OR the thousands, OR the million, not a combination.

World locks and platinum locks aren’t 2 different currencies, they are the same. That’s what I’m saying, 1000 byte coins is equal to 1 mega byte coin which you can dismantle back to 1000 byte coins

1 cent is the base of every currency? Every currency has a larger number to trade for to make it easier to do trading. 100 cents to a dollar, 5 1 dollars to 5 dollars, etc… 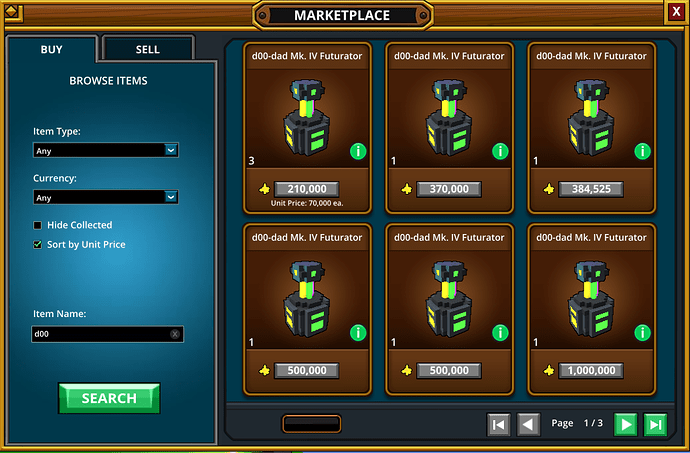 Trove_6o2vunYYns1031×678 199 KB
These are the Trove markets. See how all of those prices are easy to remember.

(ok not the third price but…)

Its because its player based, people like doing that, a nice crisp number like that goes well. You either see people selling stuff like 45, 40 numbers because its much easier to calculate, but then you have the idiots who think a shop item can rise.

And why can’t it? Just because it’s always available doesn’t make it unable to rise, just makes it harder since there’s likely to be many more of them