Well, this is my another idea, when i think of a pixel game, i would think about an RPG game, like i used to play pixel games, and pixel world has an PVE, which i love this game mode, because i like to see creatures dying in my hand, and i like the miniboss, nether miniboss is another topic right there, because i never met one, but, i would like to suggest a bossfight about my idea of an underwater bossfight which can be done in an event in fishing update, the bossfight i would like to suggest is an underwater bossfight, Which, the fisherman guide told us that there is a giant shark in the sea that harms the eco system and dangers the sea, and he want us to help him defeat the giant shark, A.K.A megalodon, so he sent us to a dynamic world (pixeliansea) where there is a portal that lead us to the dark sea, which we will wear a swimsuit and we can jump highly, and then 5 players need the poseidon scroll, that will bring us to the dark sea, and we need to fight some underwater enemies, such as sand shark, giant sea worms, ocotpus, kraken as a miniboss ( whoch is a rare chance of meeting it, about 0.1% chance, amd megalodon, the boss, how to defeat it is, atack his weakspot, a light orb, when he was weakened after attacking, (his attack is based of charging, summoning ghost pirate outside of mouth, and send torpedo) there will ba an orb somewhere around him, and then hitting the orb would lower his health, do this many times and he would be defeated, and there will be a sunken chest there with prizes, the prize is:
Poseidon’s trident
Aquamen’s armour
Ocotpus hat
Starfish sandals
Some Props
ETC.

That’s my idea, if you like it, please reply nicely, this idea is based of combining the concept of bossfight in secretbase and PVE in the nether

Limited items are surposed to stay limited, so they can’t be used as a prize.

Well, it’s not tho, because nethe rhas a miniboss, and this has a boss, get it?

They would need to change water block to something you cant break with your hand, Rn ifyou try to punch enemies underwater it just tries to break that water block.

I like the idea of a boss fight underwater. It sounds pretty fun and challenging!

yea, i get it. nether is only a mini while your suggestion is the actual boss.

it can be cool if they added it, but since its water? am i going to die because of insufficent oxygen?

When we enter a jet rave and you dont have a mount, you’ll given a wood mount, so if u enter the underwater, it will give you a swimsuit,

They could just modded it 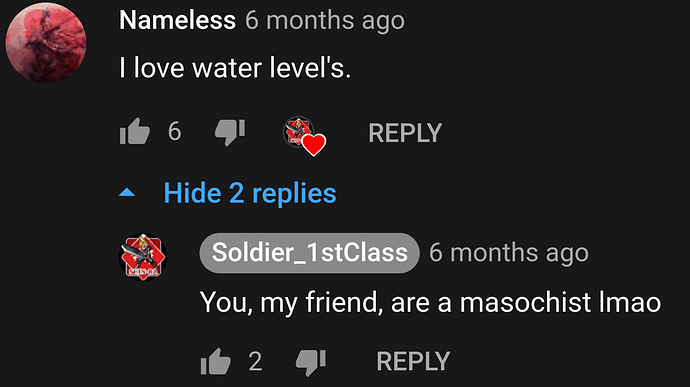 and also this i dont care if i get flagged

I like that idea because it gave some atlantis kind of vibe.

Then why are you commenting right here, just reply in YT

because i like to see creatures dying in my hand

And this idea is actually good, but they’d have to dedicate an update to this ofc

aight, i get it. thanks for making me understand your suggestion.