What world can I use to do this quest? 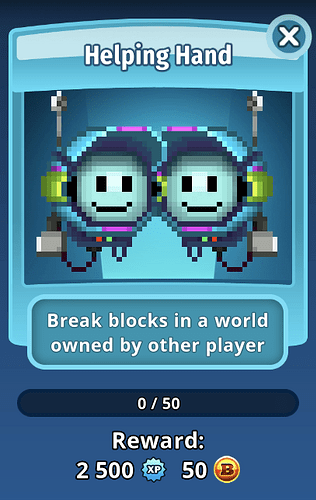 I don’t have a hammer and I’m not willing to go there.

I can put a world lock in a random world and let you break there if you want?

Nevermind! I just found a decayed world, which counts in the quest!

You need a pickaxe not a hammer in PIXELMINES. The cheapest one costs 20 byte coins (Crappy Pickaxe).

At the world, “NOOB”. Just break all the blocks placed in there.

lock tokens? what are these? all i remember is some small yellow stuff that were removed 4 months ago cuz bytes are way better as a currency

but for some reason his free-build area is currently blocked

Are you brainwashed too?

No, no one is brainwashed here. In the last 4-5 months you have been complaining about the same thing instead of moving on. Just accept the fact that BC is a better currency than wls.

Maybe you’re brainwashed into believing that world locks are better?

Hmm, many people did not support moving to Byte Coins as the currency before, but I think that we have adjusted to a new change. I believe that you too should try to put your feet in the water first.

brainwashed? that’s the only thing you say to anyone who disagrees with you, like why not accept bytes and stop crying for wls, they won’t be a currency again.never

Still, it was the most stupid decision to ever make. Let people use what they want as a currency.

Still, it was the most stupid decision to ever make.

ok if it’s the most stupid decision ever made, give me a reason why wls are better than bytes

Let people use what they want as a currency

it doesn’t work the way you want, they did it for the game and not for you, it’s not like the players are the ones hunting illegal traders