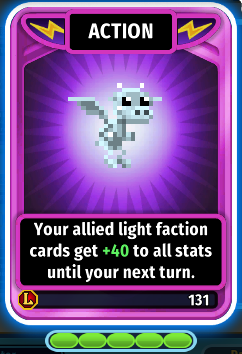 So this, is a status that is given to both clan pets, on their faction respectively. Notice how it says “until your next turn”, meaning it can be used as both offensive AND defensive.

The bug here is, if the opponent puts down another action card, the effect of either clan pets gets nullified, causing all cards affected by the action card turn back to normal.

No idea if this is a bug only I appear to have experienced, but it’s quite surprising and disappointing at the same time that I have lost a card match due to this bug.

jake experienced this too on his last stream. they will probably fix it next update

Yep, it’s a known issue. It’s probably the most severe bug in the card game at the moment so we’ll be fixing it as soon as possible.

The reason I won some battle