Maybe move your wiki from Fandom to Miraheze?

While you might consider Fandom as a kinda fair platform, here is what experience I have collected over the months.
While it does provide free hosting for your wiki and a wiki software for you to use, their employees are absolutely terrible in my opinion.
Here’s what is bad on the Fandom platform:
1. Elitist Clubs
As far, there are 3 elitist clubs on the Fandom platform. One is a team that has access to direct contact with global admins, the second is a spam task force that has global admin powers, the third is a team of “wiki superadmins” that have even more power on Wikis than the wiki owners do.

Problem is that all 3 are invite-only clubs and all the criteria is extremely subjective. You might edit wikis and be literally a perfect example of what you should do, but you won’t because one admin hates you.

2. Global-admin switches
You might have heard of “plugins”, a way to add neat features such as automatic spam detection, edit counting, visual effects, etc.

But there’s one catch – they’re all off by default, you need to turn them on But the switches are missing! You need to contact Support and get them to switch them on or off instead of you, even if it’s your wiki. And they won’t switch them on if you do not meet their arbitrary criteria.

It’s not only the plugins, let’s say you accidentally promote someone to Bureaucrat. You can NOT take this status off them afterwards. And yes, that is up to support, and NO, they won’t remove the status if you do not do a “community vote before”, even if they’re doing clear vandalism and abusing admin.

3. UCP
This is relatively a new problem, all of the wikis are being forcibly updated. This means that a lot of the features you have been using will be discontinued and a lot of stuff will not be compatible. This is not a major problem though.

4. Wiki Bans and their overuse
You might create a wiki, then go sleep after a nice day of editing, and then the next day, wake up to a fancy message telling you “This wiki has been banned. Contact Support to discuss this. After 30 days, your wiki will be deleted”.

While it’s perfectly OK to ban wikis for ToS violations, they now also ban wikis that are deemed “inactive” by them and wikis that are even vaguely similar to some other wiki. While they CAN unban a wiki, they won’t do it.

5. Banhammer happy global admins
Yes, I have been saving the worst for last.

My advice is, do not join their Discord if you want to have a good time there.

The second I joined, a global admin (let’s call them AE - abusive employee) has “greeted” me with “Did you learn your lesson”? This was from a ban that happened a month ago.

The AE has also figured out my Reddit account and begun stalking it. They have “magically” found a post calling him out on his behavior, and started harassing me for that.

Every time I brought something up, they kept saying that “this isn’t a clubhouse” - the chatroom was LITERALLY named #random.
See the following image:

Then they continued to threaten me with a ban, see Image #2: 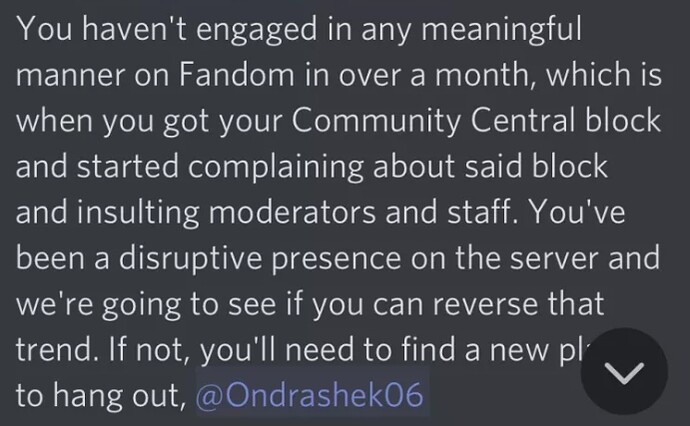 I then continued to be quiet as I didn’t want a ban. However, randomly the server has disappeared from the list, saying that I am banned. I rushed to customer support asking why, and after convicing one rep I was talking about the official Discord, AE has replied with this:

They didn’t just ban me from the discord, they also remotely deleted my account on the whole platform, to the point where it’s irrevocable and they can’t undelete the account.

See how long of a rant I had against the platform? I would be glad to edit the wiki, but due to the issues and the account deletion, I just cannot.

Maybe try moving it to Miraheze. It also a platform to host your wikis on, but AFAIK I have encountered no problems with wiki bans or the AE.

Although you were banned unjustified, this would be a hard-start for wiki makers since the wiki from fandom tooked a year to complete and edit.

i agree with you, as what i saw in the website Miraheze. its better than fandom. eg. no ads or such.