I used to play TROVE on my brothers laptop when I was, like, 9. But my new computer is high on R.A.M. but low on Graphics card memory.

Glad to see Trove still being alive and well, though it ran itself in the ground by Gamistop acquiring Trion.

I hate every single aspect about Club 2.0 and the overhaul. Clubs were meant as worlds to hang out with fellow members and to control building permissions in worlds. All other worlds were public and with FFA building (except cornerstones). I still don’t get clubits, adventurine, fixtures, and how to get more club EXP.

MoP was a disaster, all it did was made items harder to obtain and made 50% of the items just untradable, making them useless.

On the contrary, I really enjoyed Geode and the entirely new gamemode it brought to Trove, the second hubworld, and the digging. It was so cool.

However, Geode also inspired DELVES which are again extremely complicated and replaced the Shadow Tower which was great to play.

Bomber Royale is kinda a fun mode but it replaced the CTF portal and made battle levels impossible to obtain, making them relics of the past. I also liked playing CTF in Trove, was also a fun twist to the usual dungeon grinding.

Cool jm 13 to lol
What an accident

Thanks for reminding me this game exists, time to get addicted again 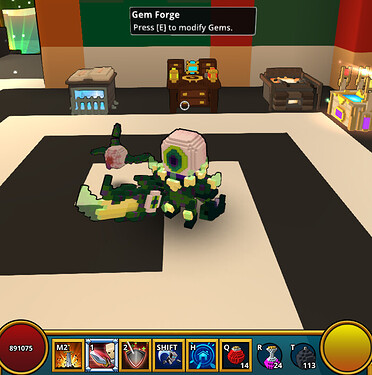