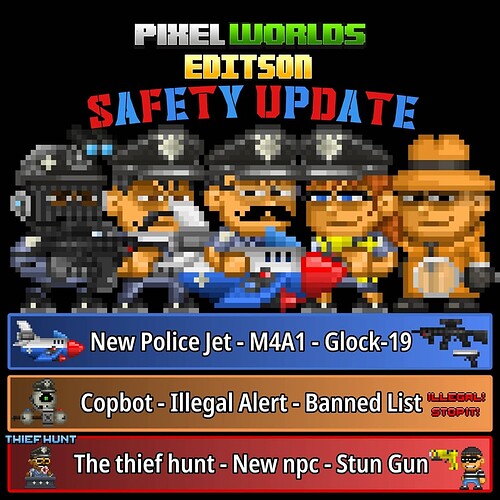 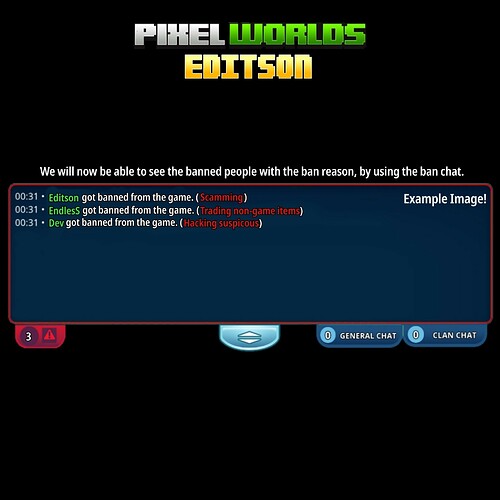 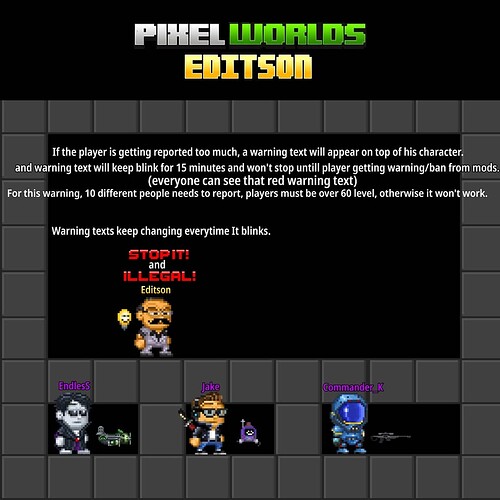 THIEF HUNT
The Thief Hunt can be accessed in Pixel Station where players will have to give 65 different types of stolen stuff to the Police NPC in return for exclusive prizes such as the M4A1 and the legendary Police Jet! 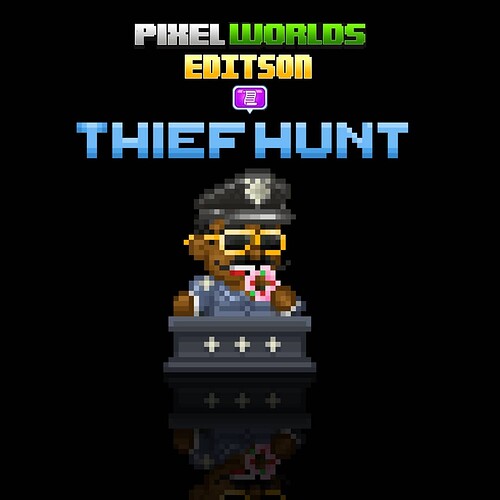 To get these stolen items, you need to catch the Thief, he randomly spawns in the worlds. When Thief spawns, he’s behind an prop, and every once in a while, he sticks his head up and stares around.

COP-BOT
Its in the shop in the special items section, it is worth 2000 gems. If you put it in your world and walk closer to it, it will tell you rules of the pixel worlds randomly. 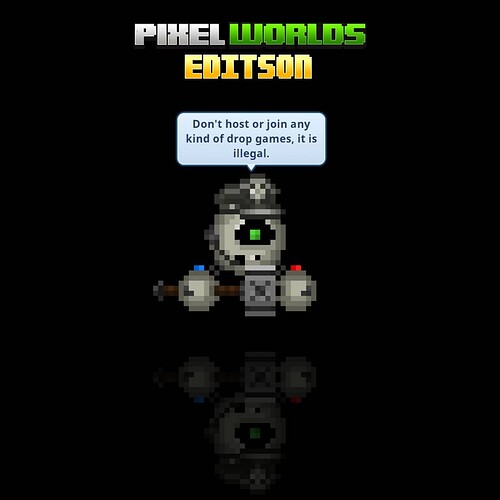 I give all the right of my feature design to Kukouri Mobile Entertainment Itd. to use it as they please in their games/social media or in any other form of media.
10 Likes
Mysterious January 30, 2021, 12:32pm #2

Looks quite big of an update, wow.

this is a pretty interesting update especially catching thieves in the world. Does the thief take items in your world? I’m scared of losing items when I was gone.

The ban chat wouldn’t work in my opinion because people rarely get banned, when rule breakers see that no one has gotten banned in a very long time they will think they are safe to do illegal stuff.

Sounds like a good idea but wouldnt be the blinking thing above u affect naming or shaming?

If they want to see their name on that banned chat, they can do illegal stuff. Also seeing no one has gotten banned in a very long time doesn’t mean mods are offline, that means there is no any rulebreaker, except for him.

Yea, but I don’t see any shame by saying STOP IT!
Its just warn the player, so he will know that he doing something illegal.
But yea maybe “everyone can see that warning text” idea can be changed to only rulebreaker player can see the warning text.

The update we need, I would work for theft hunt for prizes.

I Would like the thief hunt in the game as that’s a great idea. However i would have to disagree With it showing someone has been banned in the chat, I think a mod said this but they try to keep player records private. I also don’t think the red warning text is a good idea, I Think only the player can see it not everyone else, how you stated it is it triggers after the 10th report. So every 10 reports a player gets, over time the warning text would appear.

I mean that it doesn’t reset so the reports over time will build up so say if you got 9 reports then like 5 months latter you get 1 then the warning text will appear.

Personally, I dislike the idea of able to see banned people with the ban reason.

If you noticed, we already have “… have been banned from GAME”. I think that text should be enough to make people aware of what is going on. We don’t need to single out that this player has been banned for scamming for example. Unless the player is exposing the ban reason their selves through other social media platforms. It is up to the player whether to let the community know that they have been banned for … reason. It’s more into privacy problems.

Maybe that reason is collected as “personal information” and Kukouri will refuse to share (ToS/Privacy and Cookies) unless the player agrees.

Second, I still dislike the idea of a warning text appearing on top of his character. If the player gets reported 10 times already by different players, then those people should aware that the player is doing illegal actions and shouldn’t interact with the player.

10 reports should be enough to get mods’ attention on the report logs. And some cases, the player will actually beg to get reported. We don’t want to “get reported” as a center of attention for the community.