In this post, I am going to express everything that I think about this update, what it lacks and what is good about it. Note that the update is still not completely explored and so my opinion may change, but that is unlikely to happen. Let me know what you think about the new features and additions.

Nothing much to say about these, they are always a welcomed addition to the game since it allows a bigger spectrum of blocks and such which in turn will make the WOTW’s much more better.

Well, although anyone can use Jets in worlds now, JETRACE has little to no use as of now. At first JETRACE was the only way to get yourself a Jet outside of JETRACE, but then Santa Sleigh appeared, which allowed many people to just skip JETRACE and buy the Jet for real money. This lead to JETRACE to become a bit less active than it was. However that does not end there. As time went on, people recieved more of those wearables from the Aviation Chest and they slowly became less valuable and many people already made Jets for themselves, which slowly made JETRACE not worth to do anymore since the wearables cost pennies now and there are a bunch of jet sellers out there in trade worlds. It got to the point where I could not see a single person inside HANGAR and rarely anyone was in a race with me while I was grinding Golden Gears. But the last nail in the coffin was enabling Wooden Jets on the Rule Bot, which completely makes all of the Jets that you have to craft useless, because none of them outmatch the Wooden Jet with any stats and such, which means that Wooden Jet is the best one because it is free, which means that doing JETRACE apart from achievement and quest is absolutely not worth it anymore. Just buy a Rule Bot and you have infinite flight. This brings it to the other item.

This update brings something equal to EPWR but a bit less harder to obtain - Space Warrior Jet. To get one, you must get Crescent Tongue Potion which requires 100 Golden Dust. You get 1 Golden dust for 2 Nether Embers, which means you have to spend 200 Nether Embers. Then you have to make a Golden Hot Tube. Finally you can then make the Crescent Tongue Potion and trade it for Chassis blueprint. You then have to obtain 2 Flame Crowns which are not that cheap to get because you need 2 new Flask of Flames which requires quite a lot of materials. You then make the Crowns and then get shards for the Blueprint and then combine all of it into a Jet. However, as mentioned before, there is completely no point into getting this Jet because it does not have any benefit over other Jets and is outclassed by the Wooden Jet in terms of price (which is free!). It is sad to see that a feature with such a great potential such as JETRACE is now in its dark times and became completely useless.

While the Crescent Tongue Potion is completely useless on its own and acts a cosmetic item, Flask of Flames is quite interesting. Sure, it is used in crafting the new Jet (which is completely not worth it as mentioned above) its effect is rather dissapointing. Some people did a test on it, and its completely the same as Flask of Breaking. This makes the flask as useless as the Crescent Tongue Potion if we dont include the fact that you can craft a Jet from it (again, no point in making it).

Reinforced Bamboo Rod seems like a pretty interesting addition. Not quite sure how can it be used but i’m sure people will find a great use for it eventually.

It is quite annoying to get but i am sure that it pays off eventually. Though I don’t like taking care of pets since its quite overwhelming for me, it gives more benefits to those who regularly take care of their pets. I can see Crab Bait as a new fishing META when the bait price drops.

Nothing much to say, it happens every year and you know what it is all about.

I understand that developers are currently working on a bigger update, but still, I think that they shouldn’t add useless stuff and instead make it actually worth it. This update officially killed JETRACE but I hope that it will be fixed in the near future. This game was and always will be about cosmetics so I doubt that Jets will gain special stats to have advantages over other Jets, but it is what it is.

Let me know what you think about the update.

The update to the mount rule bot is probably the most controversial, which you also seem to agree with, but it does allow for jets to be more used in worlds and whatnot. I think it’d be best to make the other jets more worthwhile to go for other than just the mount rule bot, perhaps better defensive stats or an increase/decrease in knockback, something along those lines to allow them to be more unique. Another comparison that could be made is comparing this update to previous St. Patricks updates: In general, this update didn’t really bring a game changing feature like other ones (excluding 2017) have added (like the PWE, reworked leveling, PWE orders), but considering that as of late the game has favoured May updates over March updates, I suppose it just allows the development team to have more time. For a smaller update, certainly not bad in my opinion.

how to get bp? i cannot find it

maskedman made again
i think 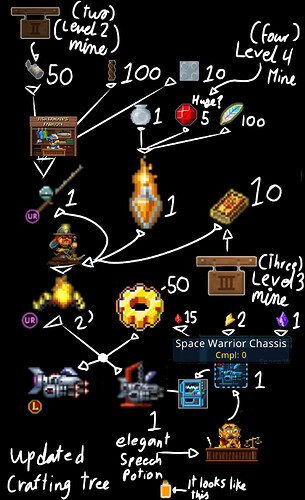 To get space warrior jet is not that hard

But you can use temporary mounts only if it is set to ON.