What do you think is the "Ultimate Prize"? (My thoughts on the lore)

There HAS to be some sort of prize for discovering the entire lore. Maybe not an item, maybe it’s access to some sort of a hidden feature, or just knowing “the pixel worlds secrets”.
I think that the lore, once finished, will lead to a prize in the following way:

While I don’t think that the full lore is finished yet, it will surely be something big when it is finally done and someone uncovers the prize.

Post what you think about the final prize, and what do you think of my thoughts about the lore.

I think we will all get 1 soil block

To be honest there is no an items or something like that as a reward for finishing it.
At the end, it’s just the backstory of the game. Not every player is interested on this topic but, yeah, you know…

If it was meant to just be the backstory of the game, we wouldn’t get glowing/lightabsorbing shards from the riftworld.

Nobody knows yet. These are just predictions

Perhaps, we will end up knowing stuff like, “Where does the pixelian comes from?”, or “Why there are monsters in the NetherWorld?”

And we will finally understand the tutorial cutscene.

Hahaha, yeah, they are taking long to finish it, anyways…
See you in the other side. Once the lore hunting has finally come to an end.

@HeyRicky, yeah, that’s what I mean by “knowing the pixel worlds secrets”. I’m not saying that there has to be an item or feature prize. But honestly, even if there is no item reward, I’d still like to know what is with the lore-related worlds always being in some sort of a facility.
One of the possible scenarios could be that they’re planning to fully release the lore in the inevitable last PW update, so that people have something new to discover themselves instead of wanting developers to release new features. So that we are meant to discover the beginning of PW before we discover the inevitable end of the PW servers.

This is the riddle: 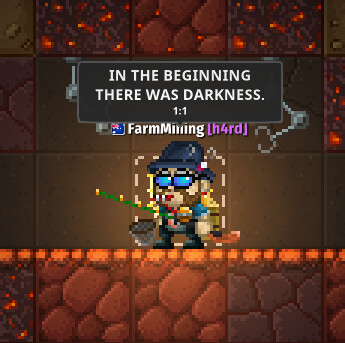 Now help us to solve it, please.

it would be nice to know whole backstory of the game

How did they even get to the sign? What opened the block.

Genesis, in the bible, have no idea what 1:1 means, maybe darkness to light?

How do you even get up there to the plate? And I honestly have no clue how to solve that, sorry. I just know that it is the first sentence from the Bible, but I’ve tried entering “genesis”, “let there be light”, or the entire next sentence, but no dice.
And I have no clue what does the “1:1” even mean?

You get up there with a jetpack.
People say 1:1 means: first line first chapter.
But really nobody knows for sure xd, it’s a riddle which we have to solve.