There are no previous PWE sales 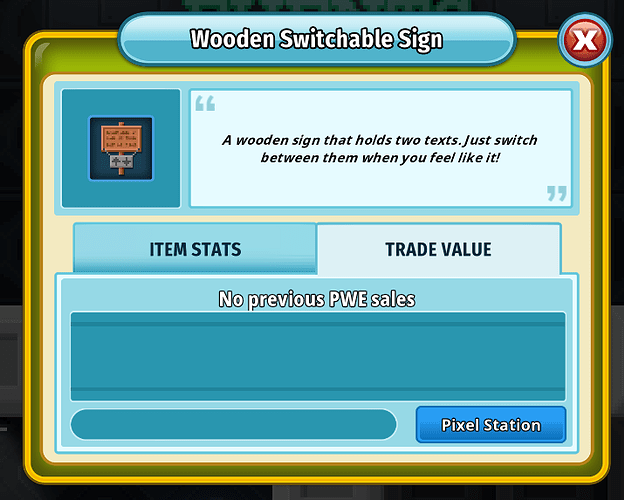 You can’t find it in PWE 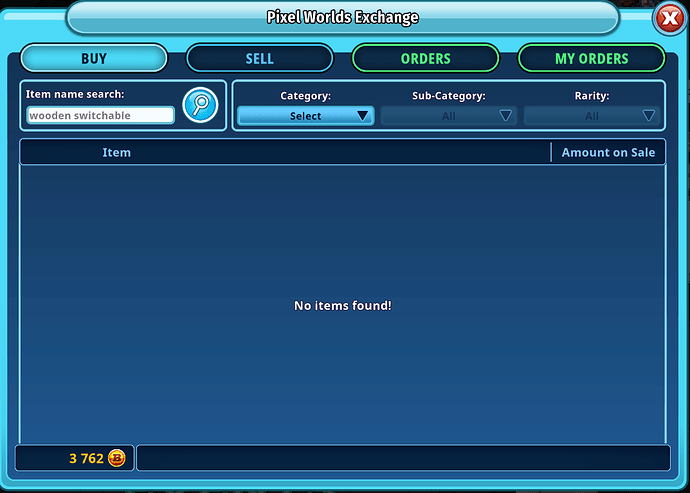 The block IS tradeable so this must be a bug…

I honestly never have seen that, that is probably a glitched item (or it is an actual item, just not coded for pwe)

I have them in my inventory… it’s a crossbreedable item.

Oh, ok, so it probably has not been coded properly

You can’t find it in PWE

my orders → place order and search any item, you can see the info there
i think it doesn’t show up in the buy section because no one is selling it. since more people is forced to use pwe to buy/sell this won’t be a problem when the update arrives

what item is it?

It doesn’t show in orders section either.

It hasn’t been added to PWE yet, some of the other items in the Easter update as well. I think Jake confirmed this will be fixed next update.

It hadn’t been set available for PWE. It is now, will be there in the next update.

It hadn’t been set available for PWE. It is now, will be there in the next update.

Um, not a game developer but maybe I could help. I think it’s because they are a team and not indie developer?

Good question! We’re a small team and everyone’s usually working on various things between major updates: The development side is quite messy most of the time and it contains stuff that can’t just be pushed to live. It takes some days for the different stores to accept the updated builds and during that time we might have found bugs or issues that we fix and these won’t make it to the live build, because we’d have to wait for the stores again. Not to mention when the update is actually out and the players start encountering bugs. Not going to lie: We don’t have the resources for thorough testing and the truth is that not everything can be tested without the live environment (multiple servers, worlds with 50 human players etc.).

Anyway, many of the bugs are minor things that went unnoticed (like the problem in this thread). They’re usually fixed immediately for development but these things pile up. We can’t release the development version at any time because of the reasons mentioned earlier and duplicating all of the fixes for the previous version would take a lot of time: We couldn’t get anything done for the next update if we spent all the time fixing bugs for various versions of the game. It might not sound like a big deal, but it adds up.

A live hotfix requires syncing, testing and building all (5!) platforms again along with a proper server version. These obviously have to be accepted by the stores again and the live update must be performed. As you may have noticed, we sometimes publish minor hotfixes that aren’t forced and might be for single platform. These are a lot faster to make.

The current situation is quite exceptional, I don’t think we’ve ever had a pause this long between updates, maybe when we added the Steam version, not sure. It might have been a good idea to publish a hotfix update somewhere during this time, but that’s all away from the card update. Preparing an update just brings the current work to a temporary halt for many of us. During the usual, about 4-week long update intervals making an extra update really hurts the next, actual update.

TLDR; Preparing and publishing the updates is a huge hassle that don’t actually advance the game state anywhere.

Now, you might be wondering why we can’t just make the game so that this stuff could be updated from the server or the client would just download some tiny patch which it could handle without updating the whole application. The answer is: Historical reasons. That’s how the game was originally developed and it’s a huge task to change this behavior. We try to make features support server-only updates when possible and it can be done in a feasible amount of time, but some things just require a client update, like localizations, item info etc.

Most item-related info is carried by the game client locally to speed things up (the game doesn’t have to ask the server for every piece of info because it knows it already). For example, the PWE search knows which items it can look for in the first place when you type something in. This (item) info was actually planned to be downloadable at first, but we were hurrying to get the beta out back in 2016 and this was never implemented. Not that PWE was even dreamt of at that point… Making this sort of system at this point is a huge task (and probably gets worse with time), which is why it hasn’t been done later on.