Different themed worlds should be easier to create and more beautiful in a sandbox mmo game, so use the “World Planner” feature to get creative the way you want.

This feature is potential for community update called “Best Update Ever”.

You can customize your world by choosing what you want from these options. Each option has a different price, its total price varies depending on what you choose.

Note: You can’t use seasonal orbs or weathers if it’s not added into the game yet. Only way to use these is having “VIP Status” otherwise these will be locked. 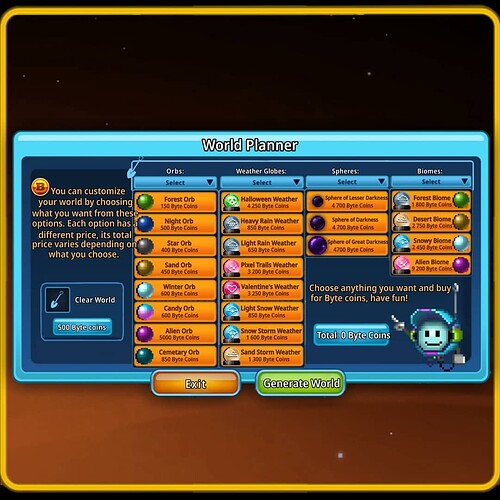 unfortunately it would make orbs as items useless unless you want to change existing orb, clearing feature is pretty neat!

Note: You can’t use seasonal orbs or weathers if it’s not added into the game yet. Only way to use these is having “VIP Status” otherwise these will be locked.

I honestly don’t like this feature. With VIP, having the ability to buy seasonal orbs when it isn’t their season would just make buying them during their season “worthless”. Not to mention that trading orbs (as Fazeus has said) would essentially be dead.

Might as well add some requirements for those “seasonal orbs”, can be 4x pricing (although it is possible to reduce the price), etc. This would cause people with VIP to think twice when using the world planner when the orb isn’t available at that time.

Otherwise, the world planner sounds quite interesting to me.

On a side note, I would actually like this to be added in already existing worlds as well. We’ve all been in that situation, where we want to demolish our own world to create a newer design. The “Clear World” feature would also work on this, although there would be a 10 second countdown before having the ability to demolish a world, just in case the owner has left some valuable items behind. A world preview (with everything inside listed) would be displayed.

Speaking of world previews, inserting an orb via this feature would also display a preview of the previous and new version of the world. This way, owners can compare between each other world, and decide whether they want to keep the current orb/globe settings, or make a new one.

This feature would only be available for owners. Full Rights will never have access to this feature if they do not own that said world.